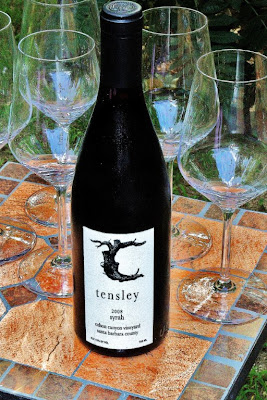 Tensley Colson Canyon Vineyard Santa Barbara County 2008 Syrah, $35.51-$43.99, 95 points, has a bouquet of Girl-Scout Cookies, black-berries, crushed pepper, and coffee liquor, rich, luscious, and totally smooth, pleasant throughout palate range, as well as a very long finish.
Tensley has produced and manifested Syrah as Syrah should be: delicious, compelling, and pair-able.
If you want a special wine treat, or a remarkable wine experience, I highly recommend this Rhone-styled wine. 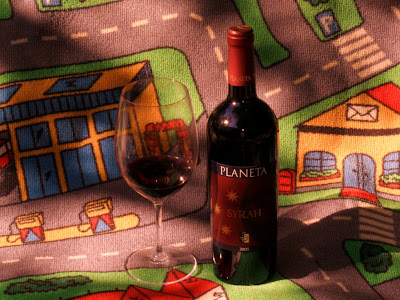 Planeta 2005 Syrah, $27.99, 91 is absolutely an experience in wine tasting! A wonderfully different Syrah from the West Coast of Sicily, uniquely rich and yet approachable, having a crushed peppery long finish and a pleasant aroma. Even at the somewhat higher price, this is a great value for those looking for something outside the box in a Syrah-Shiraz.


Jim Barry 2007 Shiraz Lodge Hill Clare Valley, $17.99, 90,  is a powerful red wine, this remarkably consistent and complex Shiraz simply will not quit; big, bold, and bright, the 2007 has a story to tell, of its high rocky elevation and cool temperatures that stingily produce low-yield grapes bursting with intense fruit flavor, with notes of licorice and chocolate, as well as hiding many other flavors for the mature wine taster, and having a long finish of spice complimenting your biggest sauces and meats.


Gallo Family Sonoma Reserve 2005 Syrah, $8.99, 89 points, was a big surprise for me. I've found a focused Syrah of plum and dark berry, and simply awash in a fair peppery finish, only a fair aroma, but a medium bodied richness that impresses right up to a late palate lusciousness that is most pleasant. This wine has been in my cellar for some time eluding my tasting, but gratefully I found it hiding, and hiding no more. Big buy in my book.


Marquis Philips 2007 So.E. Australia Shiraz, $15.29, 87 points, and a fair price for such a big wine. It held-up nicely for three days, but at times was a bit bitter; maybe with a year or two in the cellar some of that bitterness might mellow-out, but as is, the Marquis Philips was a good, typically bold Australian Shiraz that paired well with beef, and would make a great red wine for the barbecue.


Moshin California central Coast 2000 Syrah, $14.99, 87 points, smoothly goes down, for this quaffable, and fruity red wine (having mellowed tannins combined with 13.6% alcohol), characterized by its easy drink-ability, identifies this as a California Syrah vs. the the heavy bodied, alcohol driven Australian Shiraz (not all, I know). Though I found the 2000 a bit too tame for me, as it reminded me of a good aged Columbia Valley Merlot. I still recommend this wine, but I would like to try the 2007 vintage as a comparison.

Copyright 2010 Dennis Tsiorbas. All rights reserved, Template provided by Blogger
Posted by New Hampshire Wineman at 2:44 PM No comments: Links to this post

I reviewed this wine on August 1, 2010 saying: "Having a long white pepper finish seals the deal. I rated this a 91. The aroma is gentle and lovely, deep red color, light (easy to drink) yet complex and rich enough to thwart any doubt that this is a serious Zin."

For the time being, I've abandoned Zinfandel for Shiraz-Syrah. Though I am purchasing a new group of Zins, I wanted to venture into another wine that tends toward spiciness when young and pairs well with similar foods as Zinfandel, though Shiraz is, as I sense it, usually more dense and luscious, richer and aromatic, yet not always so, as evidenced by the Gamba Zin, or the aroma of the Dry Creek.

Because of time constraints, I begin my commentary by listing a few Shiraz-Syrah wines that I scored 89 points to 92 points and mostly costing less than $20. They all were very good, paired well with red meats, but had their own idiosyncrasies.

Jacob's Creek 2006 Reserve Shiraz, $12.99, 89 points,  is smooth, vibrantly finishing long on the spicy side, yet individually marked with a subtle lime-peel tang. The color is more burgundy and less dense than I was use to, but flavor is king.


Mitolo Jester McLaren Vale Australia 2007 Shiraz, $18.99-$21.99, 89 points, is complex, filled with blackberry, black pepper, and a long memorable finish. It is quite typical for these wines to cellar for a few years, and I recommend this Shiraz be used as a comparison wine for those who are interested in aging wine in an appropriate wine-cellar, tasting the evolution, smoothing out the tannin and adding complexity (not always), but also keep in mind the diminishing of the fruit aspects. Most wine reviewers would just say: drink now. I say: experiment. 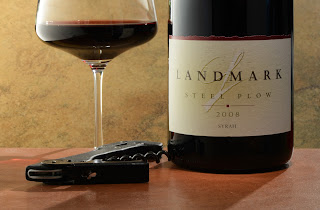 Klinker Brick Lodi 2007 Farrah Syrah, $16.99, 89 points, needed some decanting, but the earth and leather notes in the aroma were tame and pleasant, the rich texture, and spicy finish qualified this wine to be in the same caliber as the other two Shiraz/Syrah wines.

Landmark Steel Plow 2006 Syrah, $32, 90 points, has me bucking many others who were carried away with this wine. I had to hunt high and low to find this, and I was quite disappointed with it, considering all the hype WS gave the Steel Plow a remarkable 94 points, though Stephen Tanzer's International Wine cellar gave it a 90 also. I'm finding an affinity for certain wine critics!
Landmark's 2006 Syrah is a big wine, well structured and balanced, with a good finish and aroma. I found it a bit pricey, especially compared to the Penfolds 2005 Bin 28.

Penfolds Bin 28 Kalimna 2005 Shiraz, $19.99, 91 points, was rich, big and gentle at the same time, aromatic, having flavors of blueberries, mocha highlighted the mid-palate, and complimenting the finish was sweet-spice.
I scored this wine 91 points as did I score Two Hands 2007 Gnarly Dudes ($24.49) and 2006 Lily's Garden, but the Penfolds Bin 28 is, in my estimation, the best value. 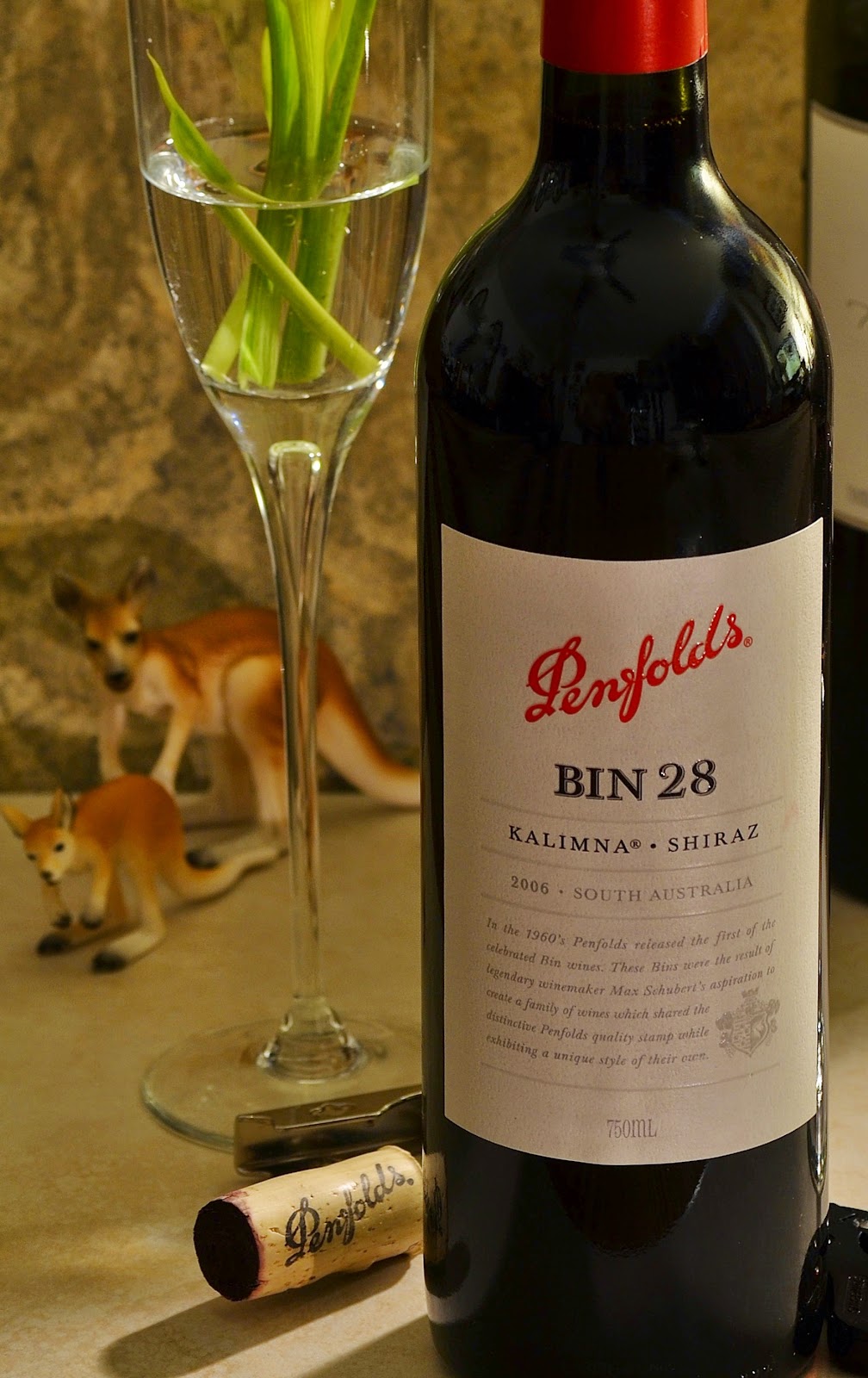 Yangarra McLaren Vale 2007 Shiraz, $18.99, 92 points has a beautiful bouquet, gentle hint of clay, early palate pepper, licorice notes, tangy and complex, with a long spicy finish, well balanced and luscious; this is a good stand-alone wine or pairs well with a rib-eye; all these 92 point wines share acclaim in my book, with the Yangarra being the best value.

This is my first corked wine, so all comments are subject to doubt.
Having given this disclaimer, I proceed.
2004 Kunde Family Estate Zinfandel was an immediate disappointment, having an aroma of an old shoe and a bite that put my teeth on edge.
Quickly I adjusted to the smell, but the taste was just too sharp for me, though it did not bother my wife.

After soaking the wine in polyethylene (plastic rap) the aroma became somewhat dull, but the flavor may have been mentally stuck in my mind.

Though I did drink the Zin, I did not enjoy it much, and will have a hard time trying another.
This is a time when going to a wine tasting is a big plus, and could occasion a retry.
I give no score, but will hold my opinion for another time.
Cost was $19.19

http://nhwineman.blogspot.com/2011/02/index-of-reviewed-wines.html
Posted by New Hampshire Wineman at 7:29 PM No comments: Links to this post

Seghesio Cortina Dry Creek 2007 Zinfandel, $34.99, is a deep ruby color with a pleasant black berries aroma. This is a very focused wine which is intent on delivering a start-to-finish luscious feel and flavor of spicy pepper with hints of cigar-box, earth, and licorice. This is a medium-bodied wine that does not disappoint. However, it is not vastly superior to the Seghesio Sonoma Zinfandel, the Cortina is better balanced and structured, but at $34.99 fails to significantly distinguish itself from its much less expensive cousin, which in some sense elevates the Sonoma Zinfandel's value.
Having 15.5% alcohol does not detract from the quality of this Zin, but compliments the tannin.

Paired with the spiciest cuisine is this wine's intent, but to just savor by itself separates this wine from the pack.

I scored the Cortina 91


Index-of-reviewed-wines
Posted by New Hampshire Wineman at 5:07 PM No comments: Links to this post